A dramatic, chaotic and frenetic game at the Emirates last night saw us scrape past Aston Villa, impressively demonstrating resilience and mental stability to attain all 3 points. Whilst this strong mentality must be applauded, it must be pointed out that this victory somewhat papers over the cracks, and should not distract us from the structureless nature of our side that continues to give the opposition far too many chances.

The line-up didn’t surprise many, with the pragmatic approach of deploying Luiz, Sokratis and Xhaka an expected decision from Unai Emery. However, young Bukayo Saka was rewarded for Thursday night’s excellent showing with a starting berth in the Premier League for the first time. We began incredibly slowly and looked lethargic and dysfunctional in possession. Throughout the first half Villa cut through our feeble midfield time and time again with merely 3-4 pass moves, and although they didn’t make too much of most of these opportunities, it did lead to them taking the lead through an alarmingly sloppy goal.

Our passiveness in defending wide areas once again cost us as Maitland-Niles was slow to stop the cross which saw McGinn peal off the unaware Guendouzi and scuff home. Why do we seem to have such a lack of a midfield and are incapable of controlling a game? Two reasons. Firstly, our pressing isn’t cohesive and we allow our front players and midfielders to press without squeezing our defence further up the pitch, leaving huge gaps between the back 4 and the rest of the team, allowing the opposition to exploit this space thus leaving our defence exposed. Secondly, Granit Xhaka’s immobility at the base of our midfield makes us extremely easy to by-pass. Things went from bad to worse when Maitland-Niles’ recklessness and naivety saw us reduced to 10 men for two bookable offences.

Whilst we struggled to gain a foothold against the 11 men of Villa in the first 10-15 minutes of the second half, the brilliant initiative taken by Guendouzi saw us obtain a life-line with Pepe’s penalty. However, unacceptably we allowed Villa to score immediately after levelling, in a goal that reminded us of Luiz’ total ineptness in staying alert. However, the freshness brought to the side by the introduction of Torreira and Willock rejuvenated us and we asserted late pressure and dominance to grind out the three points with important late goals from Chambers and Aubameyang. An excellent victory given the context of the game, but, as I eluded to earlier, this should not paper over the cracks.

We move onto Old Trafford.

Tell me your thoughts below and if you don’t understand some of my ratings, ask below and I’ll give some justification

Traore, Martinelli and Henderson are new entries in our Premier League POWER RANKINGS

By James Dutton For Mailonline

Each week throughout the 2019-20 season, Sportsmail will bring you a Power Rankings table, listing the top-10 hottest players in the Premier League.

As the stories of the season unravel, the rankings will provide a form guide with players moving in and out of the top 10 depending on both their performances in the previous fixtures and also in recent weeks.

So, who wins a place in the latest edition of our Power Rankings?

Since Richarlison stooped low to head past Alisson on the stroke of half time of the Merseyside derby on December 4, Liverpool had gone 681 minutes without conceding in the Premier League.

Raul Jimenez finally breached their defences six minutes into the second half as they sought an eighth successive clean sheet.

But for the hulking presence of Virgil van Dijk it could have meant the end of Liverpool’s proud unbeaten run.

With Adama Traore and Raul Jimenez doing their best to disrupt, i was another towering performance from the Dutchman to keep the pair at bay. 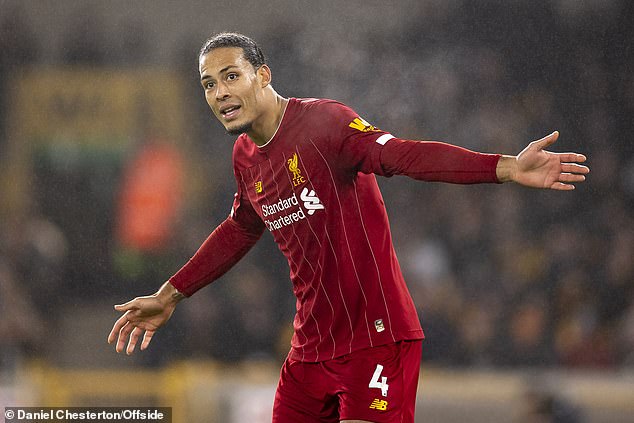 Eyebrows were raised when Leicester splashed out £30million on Ayoze Perez.

But his improvement at Newcastle had gone under the radar, and he has proved at the King Power this season – with a better quality of team-mate – that his talent has been underappreciated for a while now.

A late double helped Leicester see off West Ham and returned them to winning ways after a recent wobble. It could prove a vitally important brace by the end of the season. 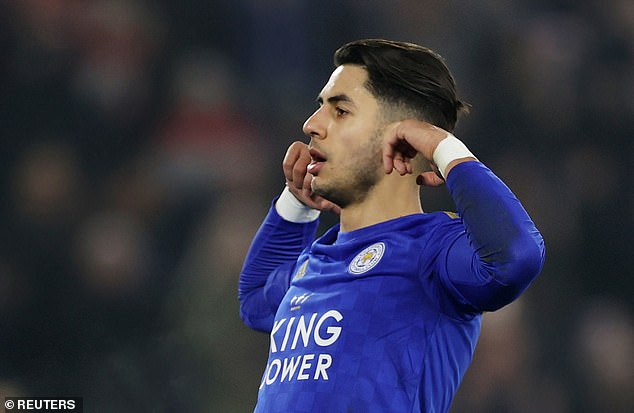 After his late heroics against Manchester United last Sunday, the time felt ripe for Mo Salah to go on another one of his runs.

He certainly had enough chances at Molineux on Thursday to add to his tally, but it was to be another wasteful night for the Egyptian King.

He looked certain to score in the first half after a mazy run gave him a sight of goal, only for Matt Doherty to get a block in. Then in the second half he worked a good opportunity on his left foot only to drag it wide of the near post.

But, by quirk of fate, it was from Salah attempting to overplay on the edge of the area, that the ball broke for Henderson to slide Firmino in for the winning goal. 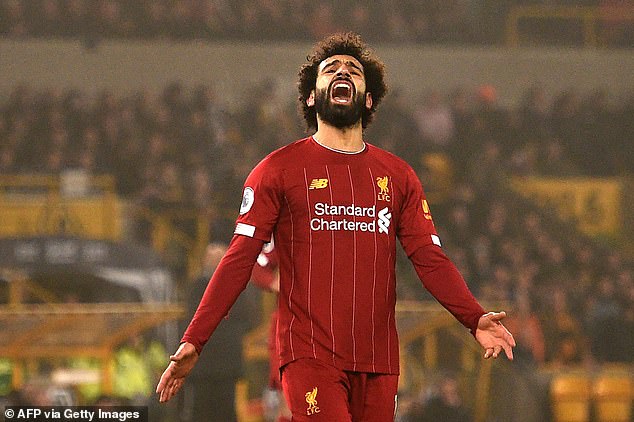 Few players offer as unique a threat as Adama Traore right now. After years of fleeting promise he is finally coming into his own and delivering on the potential that had the whole of Europe taking notice.

Though it came in a losing cause on Thursday night, his display against Liverpool was further proof of his growing maturity. He was electrifying on the ball, bouncing off opposition players and working opportunities.

His delivery is improving all the time and he laid the equaliser to Raul Jimenez on a plate. 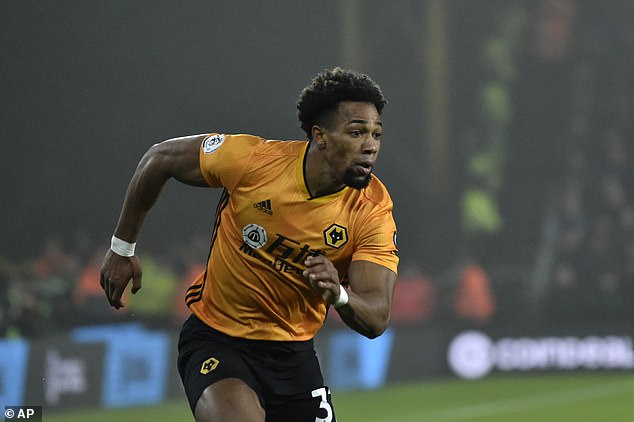 It could prove to be one of the iconic images of the year. As Gabriel Martinelli sprinted towards the Chelsea half, N’Golo Kante slipped on the turf in the face of the lightning counter attack.

The Brazilian teenager was offered a free run on goal and there was never any doubt that he would slot the ball home.

At just 18, the ceiling of potential for Martinelli is huge. It was just his third Premier League goal, but his 10th of the season. His spectacular solo strike at Stamford Bridge could well be the start of something truly special. 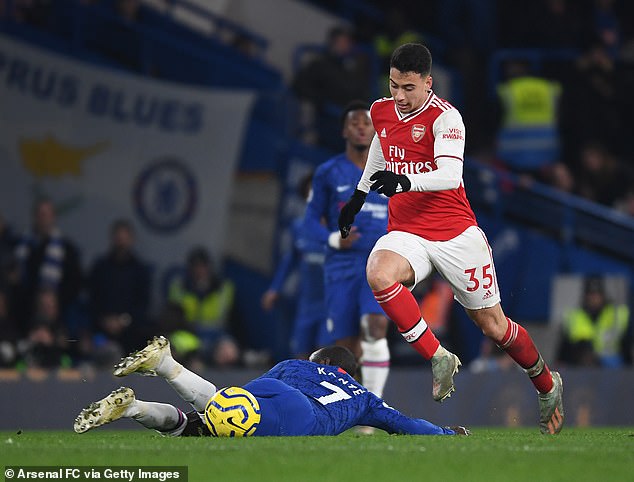 Another game, another win. Liverpool march on. But it was away day specialist Roberto Firmino who came to the rescue with his 10th goal of the season.

Jurgen Klopp’s side have won their last two away games thanks to Firmino strikes, and this one was special.

Coming just minutes after he missed a great one-on-one opportunity against Rui Patricio, he made no mistake with the second chance, making room on his weaker left foot and arrowing his shot into the top corner to send the travelling Reds wild. 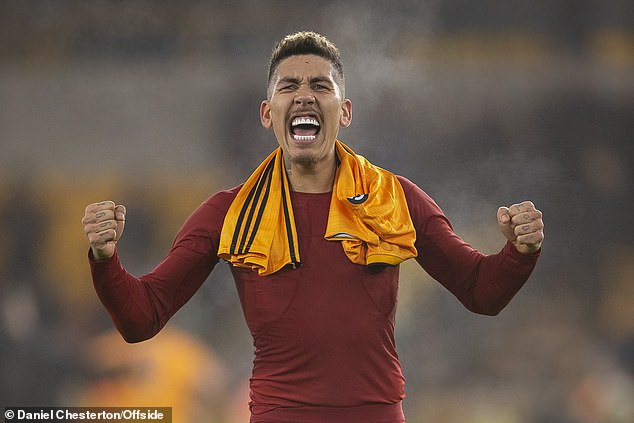 It shouldn’t be any surprise that it was Jimenez who finally netted past Liverpool on Thursday night.

It was the 28-year-old’s 20th goal of the season and he is now being recognised as one of the leading strikers in the Premier League.

It was a clinical finish, directing his header right into the corner, and he came close adding a second only to be denied by the enormous frame of Alisson. 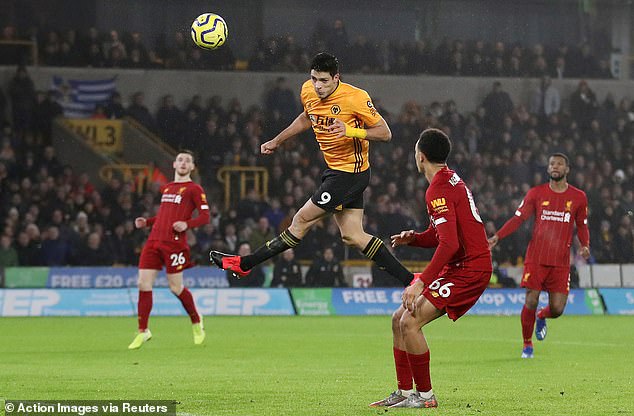 In a team of no standout individuals but characterised by collective will to win, the Liverpool captain has come to epitomise the runaway league leaders.

It was a rare goal from the skipper that set Liverpool on their way at Wolves on Thursday night, just a second of the season. Even rarer was the sight of him ghosting in to head home a near post corner.

He then had the clarity of thought at a critical juncture in the game to pick out Roberto Firmino for the winning goal late on. The plaudits are beginning to rain down on Henderson and he is a genuine contender for Player of the Year on this evidence. 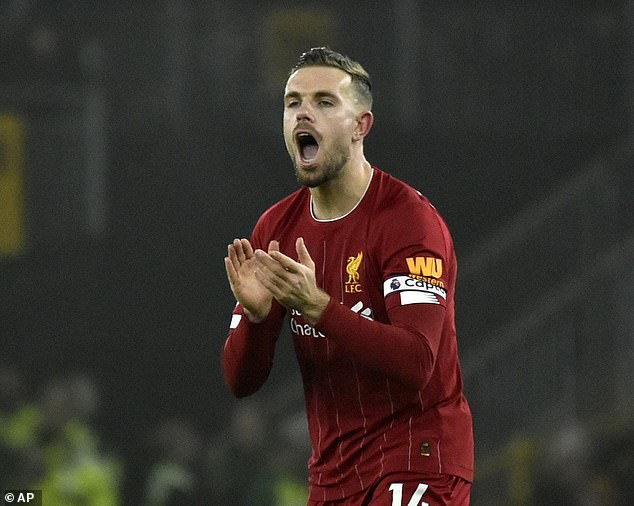 Amid Manchester City’s struggles and Liverpool’s imperious form, the majesty of Kevin De Bruyne has gone overlooked this season.

The Belgian has been outstanding for some weeks now despite the inconsistencies of his team-mates.

And his assist for Sergio Aguero’s winner at Sheffield United on Tuesday night was another collector’s item, threading a through ball across a crowded penalty area to find his team-mate at the back post. 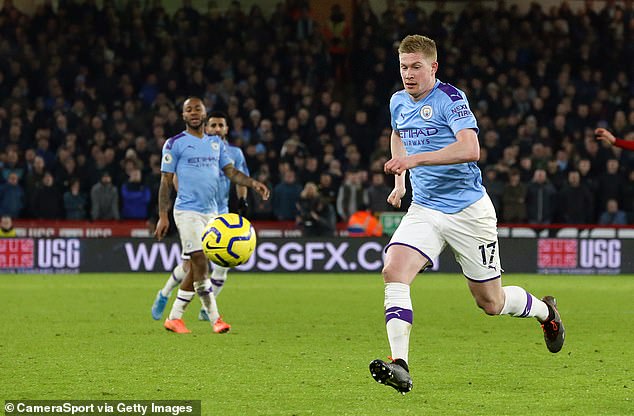 It’s six in three games now for the Premier League’s greatest foreign goalscorer. The winner at Bramall Lane came just minutes after he had climbed off the bench to rescue his side.

It has been a superlative January for Aguero, and how City missed his penalty box killer instinct over a difficult Christmas period.

With 16 league goals now this season, the Argentine will be eyeing another Golden Boot if he can keep fit. 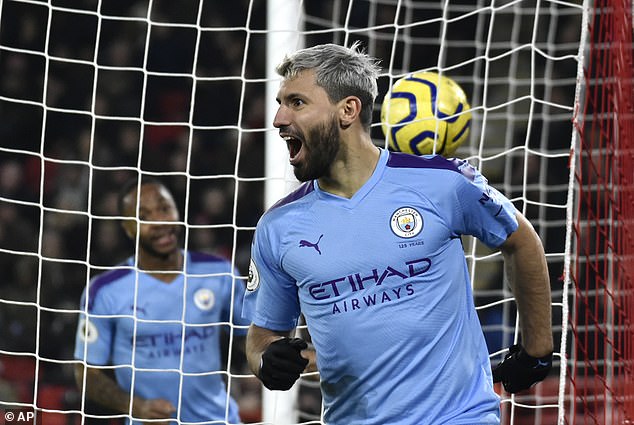 Arsenal boss Mikel Arteta insists he’s happy with Pierre-Emerick Aubameyang’s position at the club, despite suggestions he wants to leave the Emirates. The Gabon international’s future with the north Londoners has been the subject of intense speculation for several months.

Pierre-Emerick Aubameyang has been linked with a move away from the Emirates.

Arsenal boss Mikel Arteta insists he’s happy with Pierre-Emerick Aubameyang’s position at the club, despite suggestions he wants to leave the Emirates. The Gabon international’s future with the north Londoners has been the subject of intense speculation for several months.

The striker – who has been Arsenal’s top goalscorer for the last two seasons – is said to be keen on leaving the club to play Champions League football, which he’s yet to do with the Gunners.

A big-money move to Barcelona has been mooted for the 30-year-old, who is reportedly open to the idea of swapping London for the Catalan capital.

JUST IN: Arsenal are ‘front of the queue’ to sign transfer target Thomas Lemar

Aubameyang has missed Arsenal’s last two league matches through suspension, which he’s currently serving for the straight red card he received in the club’s 2-2 draw with Crystal Palace earlier this month.

He’ll be eligible to return to the starting XI next Sunday for Arsenal’s trip to Turf Moor to take on Burnley.

Arteta, however, has refused to confirm if he’ll throw the forward back into the fold straight away.

The Spaniard said: “He needs to get back to fitness and fight for his place like any other player.

“After that we will make a selection that is fair with what I see on the pitch.”

Arsenal enter their match against Burnley on the back of a 2-2 draw with their London rivals Chelsea – which has left them ten points behind the fourth-placed Blues.

Burnley, meanwhile, enter the game on the back of a 2-0 win over Manchester United at Old Trafford, which has heaped even more pressure on the under-fire Ole Gunnar Solskjaer.

FA Cup on TV: Which FA Cup fourth round fixtures are live on TV this weekend?

The FA Cup third round saw Premier League and Championship clubs enter the fray. And with fourth-round action taking place this weekend, there are eight televised games for fans to enjoy. Broadcasting rights to the FA Cup are shared between BT Sport and the BBC in the UK.

Existing BT Sport customers can live stream the action via the BT Sport app and on the company’s website.

However, EE mobile customers will be able to stream matches for free, thanks to a subscription plan announced by the network.

The company said: “To say thanks for being with us, here’s a special sporting treat for our pay monthly mobile and tablet customers: three months’ free BT Sport on your EE phone and connected tablet. Just text SPORT to 150, register for a BT ID then download the BT Sport app and get watching!”

Matches shown on the BBC can be streamed using the BBC iPlayer app and on the BBC Sport website.